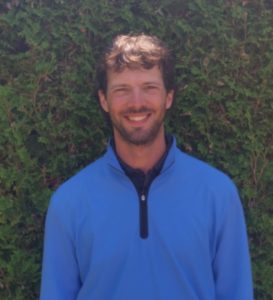 A PGA of Canada member since 2005 and an honours graduate of the Humber College Professional Golf Management Program Tim brings a wealth of education and experience to the Lago Golf Academy. While attending Humber College Tim was the PGM program student coordinator, President Letter recipient for highest academic average, and winner of the prestigious Brian Shaw/St George’s Scholarship given to a 3-year Humber PGM Student that is PGA of Canada member, academically in the top 25% of the class, shows strong playing ability, and embodies Brian Shaw’s ideals: energy, enthusiasm and good work ethic.

Growing up in Kingston, Ontario competitive sports were a major part life. A multi-sport varsity athlete in high school Tim was on the hockey (goalie), football (wide receiver/kick returner), track (sprints, relays, long jump), and badminton (3-time MVP) teams. Golf, merely a hobby at the time, was put on the back burner from ages 17-20 to work as a summer camp counselor and Adventure Director. Working with campers age 7-16 from a variety of backgrounds was an enriching experience that can be seen in Tim’s energy and enthusiasm working with golfers of any age.

A return to golf was marked by making the St. Lawrence College golf team in 2001.  Playing on the team re-ignited his passion for the game and opened the door to work at the Score Golf Top 100 rated Cataraqui G&C.C, where he fell in love with the golf industry.  The next few years were split between summers at Cataraqui G&C.C working with Head Teaching Professional Kevin Dickey; a former Canadian, Australian, and Nationwide Tour player and Ottawa Valley C.P.G.A 2006 Junior Builder of the Year and winters at Humber College volunteering in the swing lab with Bob Beauchemin, former PGA Tour member, Canadian Tour Commissioner and National Post Top 50 golf instructor in Canada.

Tim’s varied athletic background, education, and work experience allow him to work well with golfers of all ages and ability. He believes that every golfer is unique and works with your existing skill set to get the most out of your game.